When ideal u/w conditions met this wreck dive is spectacular

Currents (according to the season): Mild to moderate

King Cruiser was originally a car and passenger ferry in Kobe, Japan before being purchased by a Thai company to connect the Islands of Phi-Phi and Phuket. It sank on May 4th 1997 in less than one hour after having pulverize the top of the dive site “Anemone Reef*. Today King Cruiser is a wreck of 82m of length for 25m of wide.

Resting on 30/32 meters deep King Cruiser enchants the wreck lovers with its volume and its rectilinear forms. It is a wreck worthy of the name. The natural degradation of the wreck and the strong underwater currents possible require to be accompanied by a professional diver knowing the site. Skilfully orchestrated by the presence of snappers and soldierfishes, the access of holds or rooms allows an exploration of the most fascinating. The floor upper to 17 m of depth, where is situated the cabin of the captain, is covered with multicoloured soft corals.

King Cruiser is an ark of life which attracts schools of barracuda and jackfish who fight the conquest. The wreck is home to literally thousands of scorpionfish which are perfectly camouflaged with the rusting steel. You probably meet groupers of respectable size, moray eels, sea snakes, school of fusiliers, lionfishes, hawksbill sea turtles, ghost pipefishes and nudibranchs. Sometimes happens whale sharks join scuba divers during their underwater explorations.

=> Have a look our Sample Itinerary 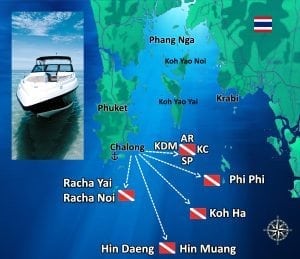